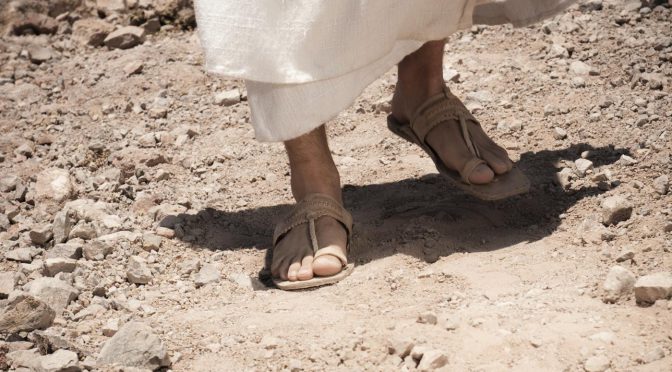 Was Jesus poor or wealthy when HE lived on earth?

The common notion is that HE was poor. But the prosperity gospel preachers preach that Christ was wealthy. Before we seek an answer to the question about Jesus’ financial status, let us ask another question: Why is the question – Was Jesus poor or rich – even relevant? In other words, is this a subject worthy of our time and effort?
At the very least, the preachers of ‘prosperity gospel’ or ‘health & wealth gospel’ allude to the notion that Christ was rich. Hence they convince their audience that they should be rich and not poor. Therefore, knowledge of this subject would enable us to determine whether there is any truth to the claims of the prosperity gospel preachers.

The Case For Jesus’ Affluence

A paper published in the journal African Research Review, entitled Jesus: Born Poor or Rich? and authored by Professor Ozomogo Jason Osai, presents arguments in favor of Jesus being born rich:
1. Carpentry, as a profession then, is equivalent to the modern day professions of an architect or a construction engineer. Hence Joseph was not a poor carpenter; rather he was a wealthy man.
2. Apparently, Mary’s parents were wealthy, “Virgin Mary “was born in the city of Nazareth and educated at Jerusalem.” Implicit in this account is that she was sent from Nazareth, the city of her birth, to Jerusalem for education; even by the standards of Judaea of that epoch, the education of the boy child belonged amongst the rich; now, for a family to send its girl child to school not in the home city but in faraway Jerusalem, which was the regional center of learning and a comparatively expensive city, is a clear indication of not only wealth but consciousness of the invaluable essence of education.”
3. Jesus’ birth in a manger is another instance of his parents being wealthy. The Bible says that Jesus was born in a manger because there was no room in the inn, “And she gave birth to her first-born son and wrapped him in swaddling cloths, and laid him in a manger, because there was no place for them in the inn.” (Luke 2:7, RSV). This implies that Joseph had enough money to pay for a room in the inn. Therefore, Joseph was not a poor man.
4. Jesus’ escape to Egypt is a case for his parents’ affluence. Joseph and Mary would not have been able to afford an unplanned escape to Egypt had they not owned sufficient financial resources.

Proponents of the case for Jesus’ affluence cite these reasons as well:1

1. Jesus was born into a family that owned a home.
2. Jesus’ step-father worked as a skilled carpenter and was required to pay taxes in Bethlehem even trying to rent a room at the inn there.
3. Jesus was born into the world and as a child was given gifts of gold, frankincense and myrrh.
4. Jesus was not hungry and was criticized for eating with sinners and publicans.
5. Jesus wore fine expensive clothes of the day that were gambled over when He was crucified proving their extreme value.
6. When challenged by Jesus to feed the 5000, His disciples asked “do you want us to spend a year’s wages to buy bread for this crowd?” proving they had that much money in their pockets to do this.
7. The disciple Judas was the appointed treasurer of the entire ministry and this is only necessary if you have enough money to manage.
8. If Judas could steal money and it goes unnoticed, then there was a lot of money in his possession.

The Case For Jesus’ Poverty

For years, preachers have preached about a poor Jesus and they may not be absolutely incorrect. The Bible seems to suggest that Jesus was poor. Consider these verses:
Jesus did not have a house to live in: Matthew 8:20: “Jesus replied, “Foxes have dens and birds have nests, but the Son of Man has no place to lay his head.”” (NIV).
Jesus was buried in a borrowed tomb: Matthew 27: 57-61: “Now when evening had come, there came a rich man from Arimathea, named Joseph, who himself had also become a disciple of Jesus. This man went to Pilate and asked for the body of Jesus. Then Pilate commanded the body to be given to him. When Joseph had taken the body, he wrapped it in a clean linen cloth, and laid it in his new tomb which he had hewn out of the rock; and he rolled a large stone against the door of the tomb, and departed. And Mary Magdalene was there, and the other Mary, sitting opposite the tomb.” (NIV, Emphasis Mine).
Jesus taught that earthly treasures are not important: Matthew 6: 19-20: “Do not store up for yourselves treasures on earth, where moths and vermin destroy, and where thieves break in and steal. But store up for yourselves treasures in heaven, where moths and vermin do not destroy, and where thieves do not break in and steal.” (NIV).
Matthew 10:9-11: “Do not get any gold or silver or copper to take with you in your belts — no bag for the journey or extra shirt or sandals or a staff, for the worker is worth his keep. Whatever town or village you enter, search there for some worthy person and stay at their house until you leave.” (NIV).
Joseph and Mary were too poor to sacrifice a lamb: “…in Luke 2:24, it is written that the Holy Family offered a sacrifice of “a pair of turtledoves or two young pigeons.” Leviticus 12:8 reads: “If, however, she cannot afford a lamb, she may take two turtledoves or two pigeons.” This shows that the Holy Family was too poor to be able to afford the prescribed sacrifice and instead had to present the alternative the Law allowed for the poor…” (NIV), says an article in the uCatholic.2
Christian apologist, Bill Muehlenberg emphasizes that Jesus was like most people in the first century Palestine: basically poor but able to get by. He contends that if Jesus and HIS disciples were affluent, they would not have required support from wealthy women (Luke 8:2-3; Mark 15: 40-41).3
On a side note, the Bible states that Jesus had a home, “And when he returned to Caper′na-um after some days, it was reported that he was at home. And many were gathered together, so that there was no longer room for them, not even about the door; and he was preaching the word to them.” (Mark 2:1-2, RSV; cf. Matthew 4:13). So those who claim that Christ had no home to live in are not accurately portraying the Biblical data.

If Jesus Was Rich, Should Christians Seek To Be Rich?

Preachers of the prosperity gospel emphasize that every believer in Christ should be wealthy. Bill Muehlenberg discredits this notion:4
The issue is this: during his life on earth, was Jesus “extremely wealthy” as folks claim, or was he very much like most people back in first century Palestine: basically poor, but able to get by.
All the biblical evidence we have would suggest the latter. And given how often Jesus warned about the dangers of wealth, it is highly unlikely that he chose an opulent and extravagant lifestyle. In fact, everything we know about Jesus suggests the exact opposite.
Those preachers who want to convince believers that they should always be rich and rolling in the dough by appealing to Jesus and the disciples are simply on very shaky ground when it comes to the biblical record. The truth is this: God may not want us wealthy, but he most certainly wants us holy. And if financial hardship is part of the means to bring about such holiness, then God is more than happy to use it.
And if he can trust us with wealth and riches, that is also fine. Of course the point of having such wealth is to finance the work of the Kingdom, not to be lavishing it all on ourselves. Wealth is a gift of God and is to be used for his work. But a lack of wealth is also a way in which God can and does work.
The issue is not ultimately about money, but our attitude toward it. The prosperity gospel teachers are simply appealing to carnal, materialistic and greedy desires when they promise every Christian great wealth. The Scriptures make no such promise, and Jesus and the disciples did not live it. We are promised however that if we put his Kingdom first, everything else will be added unto us (not for our greed, but for our need).
Finally, Jesus’ financial status is irrelevant. Even if HE were rich, there is no reasonable biblical support to the claims of the prosperity gospel preachers.
Endnotes:
1https://agapegeek.com/2011/08/07/did-jesus-have-no-money-and-set-an-example-of-poverty-for-us-to-follow/
2https://www.ucatholic.com/blog/jesus-really-born-poor-one-biblical-hint-offers-clue/
3https://billmuehlenberg.com/2013/08/14/were-jesus-and-the-disciples-wealthy-part-one/
4https://billmuehlenberg.com/2013/08/14/were-jesus-and-the-disciples-wealthy-part-two/
Rajkumar Richard spent his early years in India.  He moved in ninth grade to a tiny island in the Arabian Peninsula – Bahrain, which is his second home. A 27-year walk down the verticals of IT, Telecom, Software and Religion, allowed him to interact with a host of individuals from around the globe. He carries this passion of interacting with people into cyberspace by blogging on a host of topics through the Christian worldview.
Jul 9, 2018Guest Writer