Model, actress, and activist Lauren Wasser shares her inspiring story of overcoming Toxic Shock Syndrome and educating girls and women about the dangers of tampons after losing her right leg and the toes on her left foot to the disease. Since the life-threatening experience, Wasser has returned to modeling, launched a recent collection with Stance socks, and star on the DIRECTV series Loudermilk. She recounts her journey below:

My name is Lauren Wasser, and the life-changing journey I’m about to share will uncover the truth behind why I lost my right leg and the toes of my left foot—and why a tampon was the cause of it all.

It all began on October 3, 2012. I was 24 years old, modeling, and living in Los Angeles. That day, everything suddenly changed when a life-threatening complication nearly took my life. I was on my period. That morning, I ran out of tampons and headed to the grocery store, which was conveniently located right below my complex. I woke up feeling a bit off but attributed it to be the beginning of flu season, so I didn’t think much of it. One of my best friends was having her birthday party that evening so I contacted her to let her know that I wasn’t feeling well and may not make it to the party. 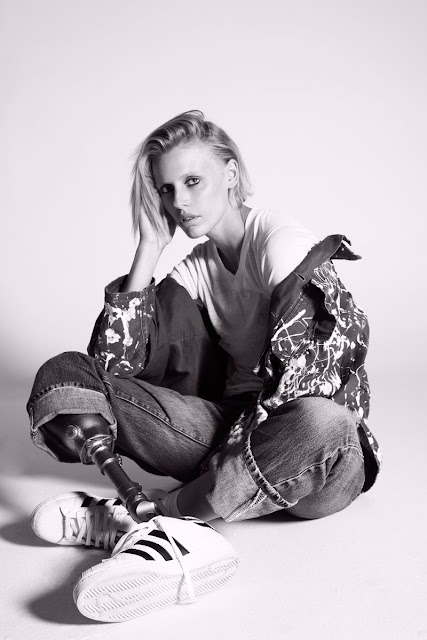 After changing my tampon again in the afternoon I started feeling worse, but I mustered up enough energy to get out of bed and take a shower. Before heading to the party, I changed my tampon once again. After reaching the restaurant, I remember hearing my friend’s say, “Lauren you don’t look so well.” At that moment, I felt like a truck had hit me. I stayed all of few minutes before heading home. As soon as I walked through my front door, I removed all my clothing (I had a high fever I was unaware of at the time) and went straight to bed.

My mother and I are very close. We talk every day, throughout the day. She knew instantly that something was wrong when I didn’t respond to any of her messages. Concerned, she called the police asking for a welfare check. I remember coming to and hearing the sound of my cocker spaniel, Madison, barking out of control. She was trying to get me up because someone was knocking on my front door. I threw my hoodie around me and stumbled to the door (I had no idea what time of day it was). I opened the door and let the officer inside. He looked around and at me then said, “You’re really sick. You need to call your mom because she’s worried about you.” 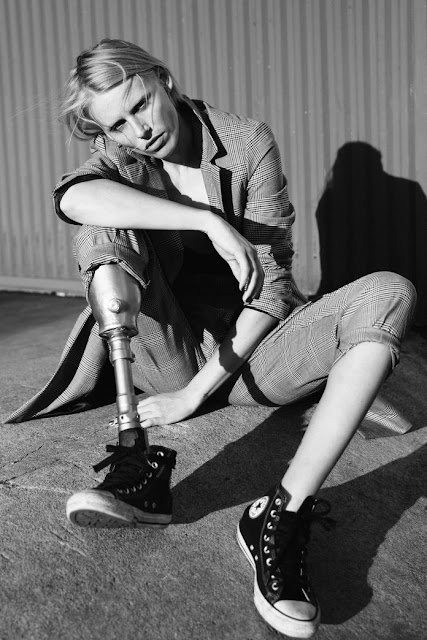 Then, the cop left. Somehow I made it back to bed. I called my mom, who at the time was in another county and recovering from surgery. She could hear the strain in my voice and asked if I needed an ambulance. I told her no and to check on me in the morning.

After that, I only know what I’ve been told. The police agreed to check on me again and this time found me face down on the floor. I was unresponsive, had a fever of 108, and was covered in my own feces and vomit. They immediately called the paramedics and rushed me to the hospital. The doctors and nurses were confused because I was this young, healthy, 24-year-old girl. It wasn’t until the infectious disease doctor was called in that things started to make sense. He knew I came into the emergency room wearing a tampon, so he immediately sent it to the lab for testing.

Three days later the results came back with signs of TSS-1 (toxic shock syndrome). In the meantime, I was placed into a medically induced coma, all of my organs were shutting down, my blood pressure was unstable, I suffered a heart attack, my fever was out of control, and I was on life support.

When I woke up from the coma a week and a half later, I had no idea where I was and no recollection of what had happened. I weighed 200 lbs., a significant rise, due to the number of pressers and fluids that were given to me to stabilize my blood pressure. Unfortunately, the pressers can also do harm; their focus is to save your vital organs, but your limbs don’t always get the blood supply they need. I remember my feet feeling like they were constantly on fire. My left foot wasn’t as bad as my right, but I needed to get transferred to UCLA for Hyperbaric treatments. (That’s where you’re put into a chamber made up of increased oxygen to help the blood flow.) As soon as I got to UCLA the fight was on to save my legs. Unfortunately, gangrene developed in my right leg and was moving quickly. My heel on my left side was severely damaged, and so were all five toes. Doctors said there was a 50/50 chance of saving my left foot. The surgeons recommended amputating both legs at that time, but I decided to fight and save my left leg.

The letters TSS that I once read in the fine print buried on the bottom of tampon boxes soon came to define me. TSS—Toxic Shock Syndrome: a potentially fatal complication of certain types of bacterial infections. The vagina is the most absorbent part of a woman’s body, and you place a tampon in that place that can bring with it chemicals, toxins. They say that it’s rare, and for the longest time I felt alone being a victim of TSS. It not only left physical wounds but mental ones. I battled PTSD and fell into a dark depression after what happened. I melted into my bed, and life just sort of stopped.

It wasn’t until my girlfriend, photographer Jennifer Rovero, took hundreds of pictures of me as I recovered from my amputations that things started to change. The process was a sort of therapy for me, which Jennifer coined as “photo therapy.” I grew to see the beauty and strength in myself and my journey through the lens of her camera. While we were shooting, we often asked young girls if they have ever heard of TSS or if they believed that it’s real.

The majority of them said no.

Another life-changing moment for me occurred when Jennifer introduced me to the [since-closed online] platform You ARE Loved. This was a website created by Lisa Elifritz, a mother who’s 20-year-old daughter Amy lost her life to TSS only two years before it almost took mine. Lisa had created this website to not only share her daughter’s story but to help educate women and young girls about the dangers tampons can have.

While unfortunately Lisa’s website no longer exists, it was the first thing in so long that had made me feel like I had something to live for—to make sure other women don’t have to go through what I did and to help those who have know they’re not alone. After researching more about TSS, I realized that I was lucky one to have gotten out alive because so many victims don’t.

You ARE Loved also connected me with other survivors all over the country, and helped me realize that I wasn’t alone at all. Two of the first girls I connected with were only 15 when she got TSS. One was reported when news broke about five girls in a small town who all contracted it. I just remember crying and thanking God she was alive. I actually called her on FaceTime because I had to see her face. Another suffered from TSS recently at the age of 17, and another at 33. All of these women have fought through numerous surgeries, some losing physical parts of themselves, others struggling with kidney and heart failure.

Toxic Shock Syndrome cost me my leg, but, years later, I have since dedicated myself to raising awareness about TSS prevention. I am comfortable in my new role as an advocate against an affliction that affects thousands. I want to educate women about the potential risks of using tampons. TSS has been killing and harming women for more than 30 years: let that sink in. How many lives is it going to take for something to change?

Every time I turn on the TV it infuriates me. You’ll see an ad for Advil or Viagra and hear some monotonous voice warn you about even the smaller side effects like headaches or nausea. When you see a tampon commercial, it’s all happy teenage girls running along the beach in bikinis.

The dangers are beyond minimized.

I grew up playing basketball, but I haven’t been able to run in 5 years. I’m in daily excruciating pain. I have a golden leg that I am completely proud of, but my left foot that has an open ulcer, no heel, and no toes. Over the years, my body has produced a lot of calcium, which causes my bones to grow on that foot. Basically, my brain is telling my toes to grow back—and it got to the point where I need surgery to shave the bone down because it becomes too unbearable to walk. I can’t get my foot wet because of the open ulcer.

But it’s time for me to live! I want to feel the ocean. I haven’t felt that in over five years.

In a few months, I’m inevitably going to have my other leg amputated. There’s nothing I can do about it. But what I can do is help make sure that this doesn’t happen to others, similar to what congresswoman Carolyn Maloney is doing.

She is working tirelessly to pass the Robin Danielson Act, named after a woman who lost her life to TSS in 1998. The bill requires feminine hygiene product companies to disclose exactly what is going into these products and what their long-term health effects are. Shockingly, the bill has been rejected 10 times.

Considering that the vagina is the most absorbent part of a woman’s body and is a gateway to many of our vital organs, it is crucial that consumers know the reality of what could happen to them.

I am writing this in hopes that you will understand that we, as women, need more education about TSS. It is time that we, as consumers, demand safer products and more transparency about what is going into our bodies.

Lauren Wasser had her second leg amputated in March 2018.

In December 2017, the model and activist, 29, revealed she would likely need to have her other leg removed as she continued to deal with severe pain as a result of toxic shock syndrome.

“I don’t have toes, and I have to go to wound care every Monday for my heel. I’m in so much pain. It’s a hard decision, but my only way to freedom,” Wasser told PEOPLE. “I can’t wait to have two gold blades, to run and feel the wind on my face again.”

After her surgery, Wasser was paid a hospital visit by double amputee Paralympian Amy Purdy.

“Thank you so much for stopping by it really meant the world,” Wasser wrote on Instagram. “Thank you for showing me that life is only going to get better and that I have so much life to live.”

Wasser is back home getting used to her new prosthetic leg and looking forward to running.

Latest posts by Guest Writer (see all)
Turn that Disappointing NO to an Appointed YESHow to overcome Temptation
Loading Facebook Comments ...