Salad Days: A sandwich between greens hearty enough to make a meal

Salad: a great dish in summer when you don’t feel like cooking or heating up the kitchen. Even better, a salad hearty enough to be a complete meal, like this month’s Deli Salad, which uses deli meats and cheese.

And speaking of salads, have you heard of the phrase “salad days?” It belongs to Shakespeare’s Cleopatra: “My salad days/When I was green in judgment: cold in blood.” Cleopatra is obviously not referring to a time when she ate salad but when she was like salad. Green, inexperienced, raw, cold as a piece of lettuce. Since then, “salad days” has come to mean anyone youthful and inexperienced. This is how a metaphor works. We have the literal meaning of a phrase like “salad days,” that is, an actual period when raw foods are eaten, and the versatile expressivity of language gives it a different meaning: “inexperienced, youthful.” Next to Shakespeare, only the Bible is as expressively versatile in the use of metaphors.

Let’s take as an example some things Jesus compared himself to. “I am the bread of life.” “I am the light of the world.” “I am the gate.” “I am the Good Shepherd.” “I am the resurrection and the life.” “I am the way, the truth, and the life.” Jesus not only compared himself to bread, light, gates, shepherds, resurrection, truth, and life, he also spoke in parables, narratives that tell one thing and mean something else. In fact, it was the New Testament writers who did an amazing thing. For the first time ever, they took a traditional, literal interpretation of the Old Testament and gave it an entirely new meaning as prefiguring Christ and his coming.

The trouble is we’re so used to the metaphors Jesus claims about himself that we sometimes forget how astonishing they are. Take, for instance, “I am the bread of life.” OK, you say—sure, I know. He is not literally a piece of leavened flour and water; He is saying that He is nourishment, sustenance, the essential source of life itself. But is that all?

Before the invention of agriculture, hunter-gatherers were forced to roam for their food. They ate a mush or gruel made from crushed wild grains and water that could not be saved. The Mesopotamians called these ancient, itinerant peoples “nomads,” meaning breadless. But once grains were cultivated, tribes settled near their food source and were no longer nomadic. One day the mush was accidentally left over the fire and cooked, and the first unleavened bread was discovered. Men could take it with them into battle, the hunt, or field.

But when God called the Israelites out of Egypt into the desert, they were being taken away from their source of bread. So He provided them with manna. Manna could not be saved; it had to be renewed every day. And that’s the idea behind Jesus’ metaphor of bread. Its daily character. He has to be renewed in our life daily. When we pray, “Give us this day our daily bread,” we’re not just asking for food sufficient for the day, we’re also asking for Him sufficient for the day. Yesterday’s ‘bread’ can’t be stored up. The power of metaphor enables us to see that.

But back to salad. In the 15th century it did not mean what we mean by a bunch of raw greens drenched in dressing. It meant any raw vegetable: carrot, celery, broccoli, cabbage—you name it. But meanings change over time, and now salad refers to a dish with raw ingredients.

The Deli Salad I’m offering you is simple and delicious, a kind of “sandwich” between greens. The dressing uses store-bought mayonnaise as its base. This version of the recipe calls for deli ham, turkey, and Swiss, but you can substitute your favorite deli combinations. All you need alongside is some crusty bread.

Salad: Combine cut-up ham, turkey, Swiss cheese, and pickles. Toss lightly. Gently fold in dressing. Arrange over shredded lettuce and garnish with olives. Serves 4-5 for a complete meal or 8-10 with a main course.

Joanne’s quick tip: Chopped or pureed onion is not a substitute for onion juice. Instead, grate the onion on a fine grater. Onion juice can also be purchased in the grocery. Only sturdy, mature lettuce leaves can hold up all that deli meat and cheese. So save the baby lettuce for another day. 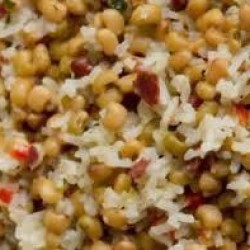