On their way home from school, three brave school boys – Devonte Cafferkey, 13, Sammy Farah, 14, and Shawn Young, 12, came across a suicidal man sitting on the edge of an overpass in Waltham Cross, England. He had a rope around his neck about to take his life. Their timely intervention helped to prevent a disaster.

Rather than panic as most kids their age might, they tried to keep the despondent man back from the edge while talking him out of his suicide plan. When the man tried to jump, the boys grabbed on to him and refused to let go.

As two of the boys held on to the troubled man, Shawn calmly rang for help. As they waited for help to arrive, two other passers-by came to the boys’ aide and they joined in holding the man to keep him from going over the edge. 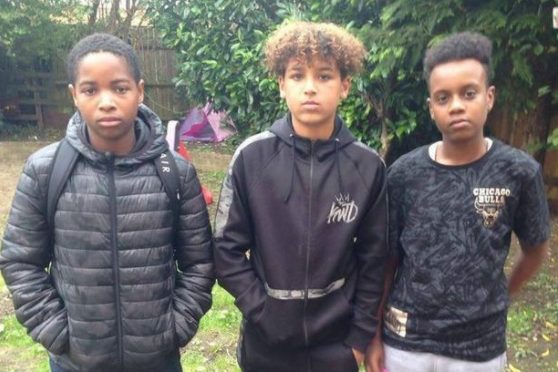 The boys who go to St Mary’s High School in Cheshunt, Hertfordshire are now to be recognized nationally for their bravery at the A10 overpass in Waltham Cross, last September.

12-year-old Shawn’s mother, Carol, was amazed at the boys’ maturity and said they have ‘just got on with it’ since their brave rescue.

She said: ‘I am extremely proud of all three of them, they are all good boys and it’s nice that they are getting recognized for doing something good in the community.

‘Quite often in the national news there are a lot of negative reports about young people so it is nice to have something positive.

‘They are very young and I marvel at how they are all dealing with it. Every time I speak to them I learn something new about what happened.

‘For example, the man was passing out and got heavier for them, I didn’t know that until recently.’

Jacqueline Cafferkey, Devonte’s mother, found out about the hero awards a couple of weeks ago and described it as a ‘huge achievement’

47-year-old Joanne Stammers, who is registered disabled with Klippel–Trénaunay syndrome, a rare disability that makes her highly prone to blood clotting, will also be honored for joining the boys and helping to hold on to the man, though it left her with bruises all over her arms. Another man, James Higlett, who also did his part in saving the man’s life, will be honored.

A date for the awards presentation to all 5 heroes has not yet been set. The award is from the Royal Humane Society, a charity promoting life-saving intervention. The boys have already picked up Special Achievement Awards at the Broxbourne Youth Awards for their bravery.

Latest posts by Guest Writer (see all)
All Is Well By The Special Grace Of God8 Types of People To Avoid At All Costs
Loading Facebook Comments ...